One of the worst things in life is walking out to a bike, getting ready to ride, and seeing a small puddle of oil pooling on the ground under the forks!  Fork seals are one of the main reasons people get their forks serviced.  Leaks can be caused by numerous problems.  Debris between the fork tube and the seal, a nick in the fork tube, compressing the forks too forcefully (such as hard wheelie landings or strapping the front down too tight while transporting), or sometimes they just wear out.  The following are a couple things to look at to help figure out the cause of the worn out seals.  First, has the bike been wheelied lately or strapped too tight during transport?  Sometimes the added stress of the extreme compression can force oil past the seals.  If this is the case pull the dust cover off and clean any oil around the seal and down the fork leg.  Watch the forks over the next couple days to see if any new oil has accumulated.

Next is when debris gets caught between the seals and the fork tube.  Normally the dust cover helps to knock off debris on the fork tube.  But sometimes dirt and small rocks can get past the dust cover and get stuck in the seal.  This pushes the seal away from the tube and allows oil to pass.  Motion Pro makes a tool called the Seal Mate.  You can use this to pull any debris out from the seals. 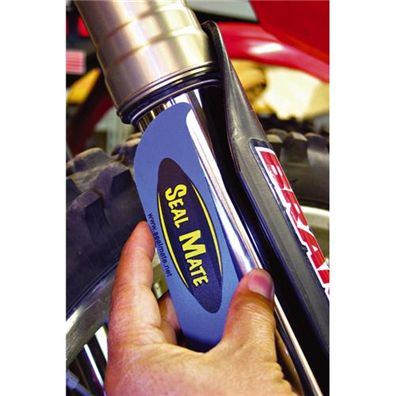 When debris isn’t in the seals the next logical step is to look at the inner fork tube (the tube that the seal is wrapped around and slides into the seal).  Normally they are coated in chrome, DLC or Titanium Nitrate.  Look for any nicks or scratches in the tube.  If any are found run a finger nail over the scratch or nick, if you can feel it with your finger nail there is a good chance it is a cause of your oil leak.  To fix this you can take 600 grit sandpaper and knock down the raised part that your feeling with your nail.  If the tube is made of DLC or Titanium Nitrate the tube must be replaced, the coating is too hard to sand.  One thing to keep in mind is if a scratch or nick is found and fixed, the seals must be replaced.  The damage is already done, but by sanding the tube it keeps from damaging the new seals. 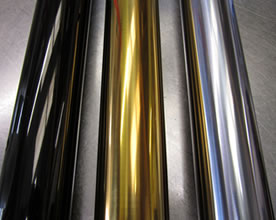 Finally, after time, seals just wear out.  Some seals will last 5000 miles, some 50,000.  There is no right answer.  But one thing that we ALWAYS recommend is using OEM seals! While at the Race Tech School, Paul Thede gave a long explanation on fork seals.  Bottom line is NO ONE makes a seal that lasts as long and seals as well as OEM.  At Velocity Calibrations we only use OEM seals.  So when it’s time to change seals, always, always, ALWAYS use OEM seals.

iMoto Suspension? There’s an app for that! I am a BIG proponent of riders experimenting with suspension settings.  Turn knobs, adjust preload, change geometry.  It allows riders to learn about ...
Tip for removing fork seals Leaking fork seals are the biggest reason for tearing apart forks.  Once you're to the point of removing the seals themselves it can be a bit of a pai...
Fork Pistons Many times you'll hear about someone putting in a 20 mm piston kit, or a 30 mm cartridge.  Or you've read about the new Big Piston Fork and you're not...