All the decisions had been made.  The race license school booked, tires purchased, trailer loaded and set to go.  I was finally going to officially become a racer.  I knew only two things for certain. I HAVE to do this, and I was going to need serious help!  The track was Gateway and the plan was to take the race school Saturday during the day, graduate, and with Eric’s help, race thirty minutes later.  I had no clue at the time, but Eric’s tuning abilities were going to be pivotal in making this a successful weekend. 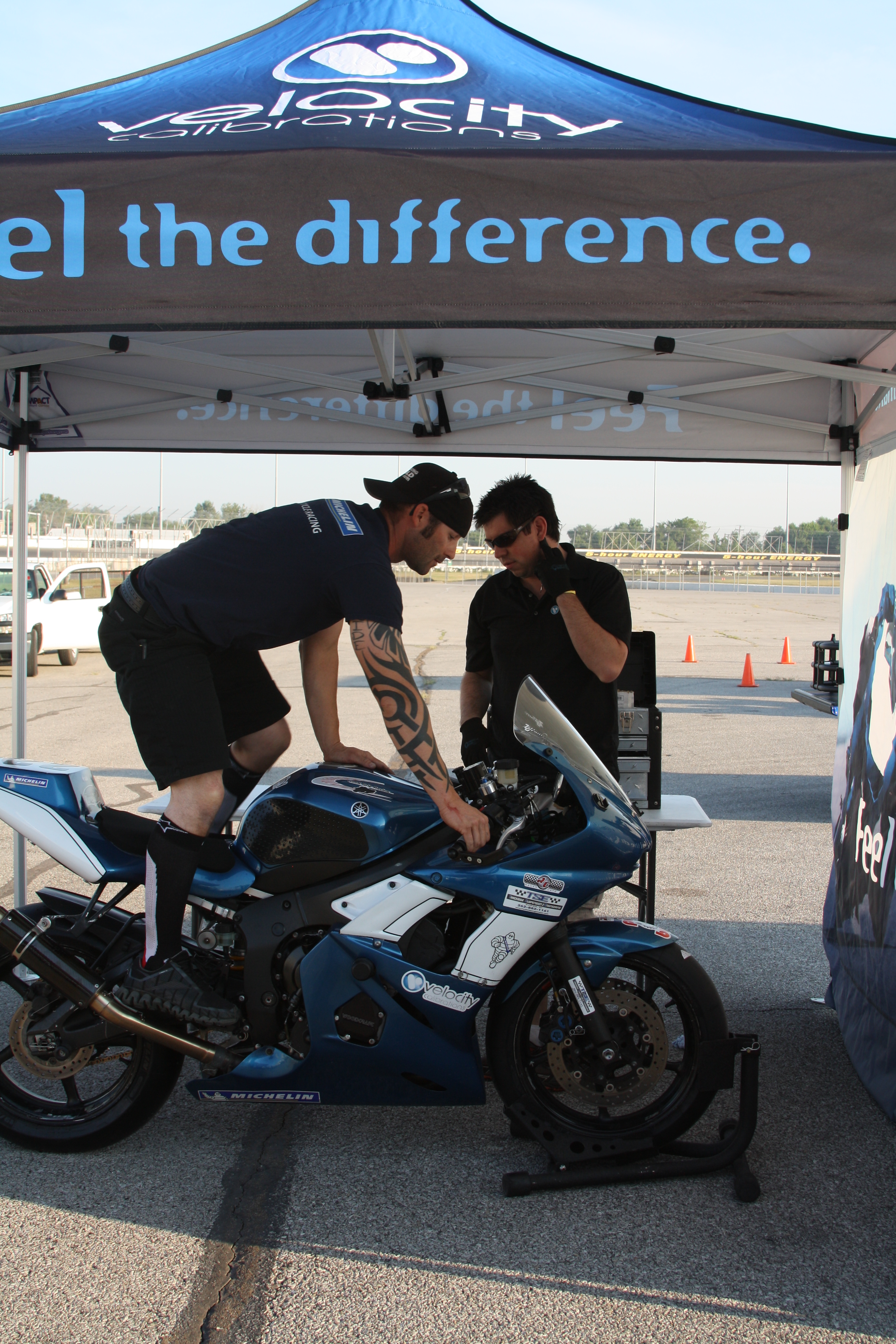 As noted in the previous article, I got together with Eric to formulate a plan for the weekend.  I had some great experiences tuning with Eric at a couple of previous events with Midwest Track Days. Each time at the start of the day, I was “happy” with the bike in its current state.  Eric would ask me what I liked, what I didn’t, and based upon that feedback; he would carefully formulate a strategy on how to improve the bike.  Each time we gave his suggestions a try, the bike feel better, and so would my lap times.  Better in the “I just dropped 2 seconds!!!!!” kind of way.  During the tuning process, we developed working relationship, and a solid way to communicate.   My job was simple: give him the most complete picture of what I felt on the track.   From this, Eric would then translate my feedback into what he thought he could change, and do so without telling me what that change actually was.  That way when I hit the track, I had no preconceived notions.  Either it simply felt better or not.  This approach to tuning was working really well for us, so I was confident that Eric was the right person to work with at my first race Gateway.  It was positive experiences like those that lead to a big decision.  Eric thought that a rear spring change was in order, especially for Gateway.  So I was faced with new track, race school, and completely different rear setup……..daunting to say the least.  But, I trusted Eric, so off with the old spring, and on with the new.

I met Eric bright and early at the track Saturday morning.  The race school would take up all three of my morning riding sessions, and one in the afternoon, with the addition of a mock race about 30 min before my real first race.  That left only three sessions to get up to speed and test the new spring.  After some slow sessions to learn race lines and track, it was finally time to see what the new spring was really like.  The session went well with some clear track, so I had the opportunity to really feel what the new spring was like.  Overall, my first impressions were very positive.  The rear of the bike was now very planted.  Traction was no longer an issue.  With the old spring rate, I had trouble with the rear spinning up on exit, as well as some instability under heavy braking.  Both of those issues were completely alleviated.   But, as there usually is with suspension, there was a new issue.   The front now felt vague on both entry, and mid corner.  I just couldn’t get a clear feel for what the front was doing.   It felt as if I was riding over tons of tiny pebbles when I was on the edge of the tire. So off the track I came to sit down to discuss the new issue. 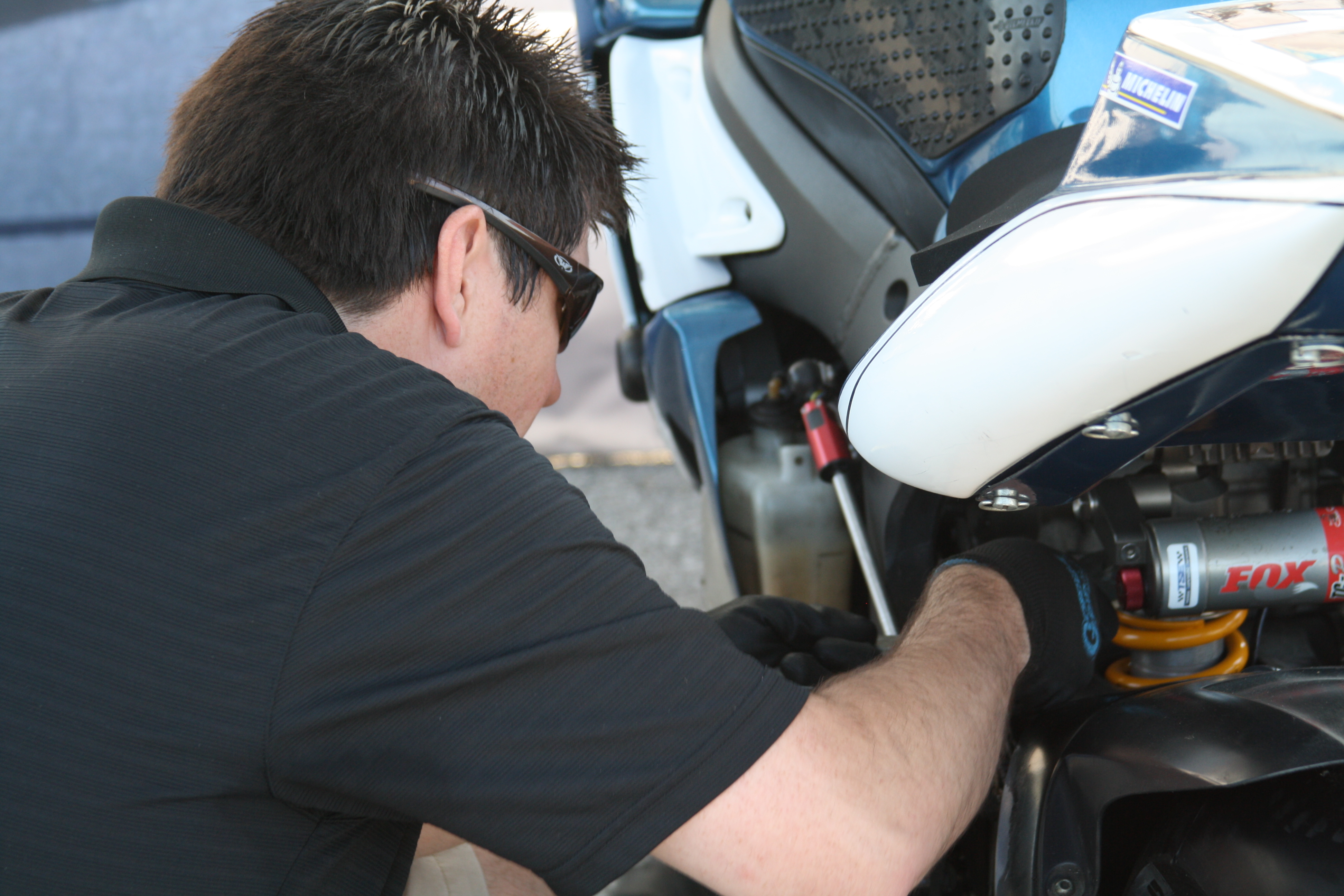 After mulling the pebble feeling over, Eric decided add some rebound to the rear.  He did just that, and off I went on another session.  The rebound was just what I needed. I felt really good about the feedback I was getting from the front.  The pebble feeling was gone, and I could finally tell what the front was doing.  Not coincidentally, my lap times really started to drop.  We checked previous race results along with the times from riders that were going to be in my race from that day.  The times were getting close, so we knew we were on the right track.

The next step was to search to for specific sections where I could make some time.  One spot I was really uncomfortable in was a section lovingly known as the “goat trail”.  It’s a third gear left corner where you descend off the banking of the oval.  It’s a pretty solid g-out, followed by an abrupt series of bumps that unsettle the chassis.  All of this happens while the bike has a ton of lean angle on its left side.  The bumps just felt so damn ruff.  The chassis would get completely unsettled. 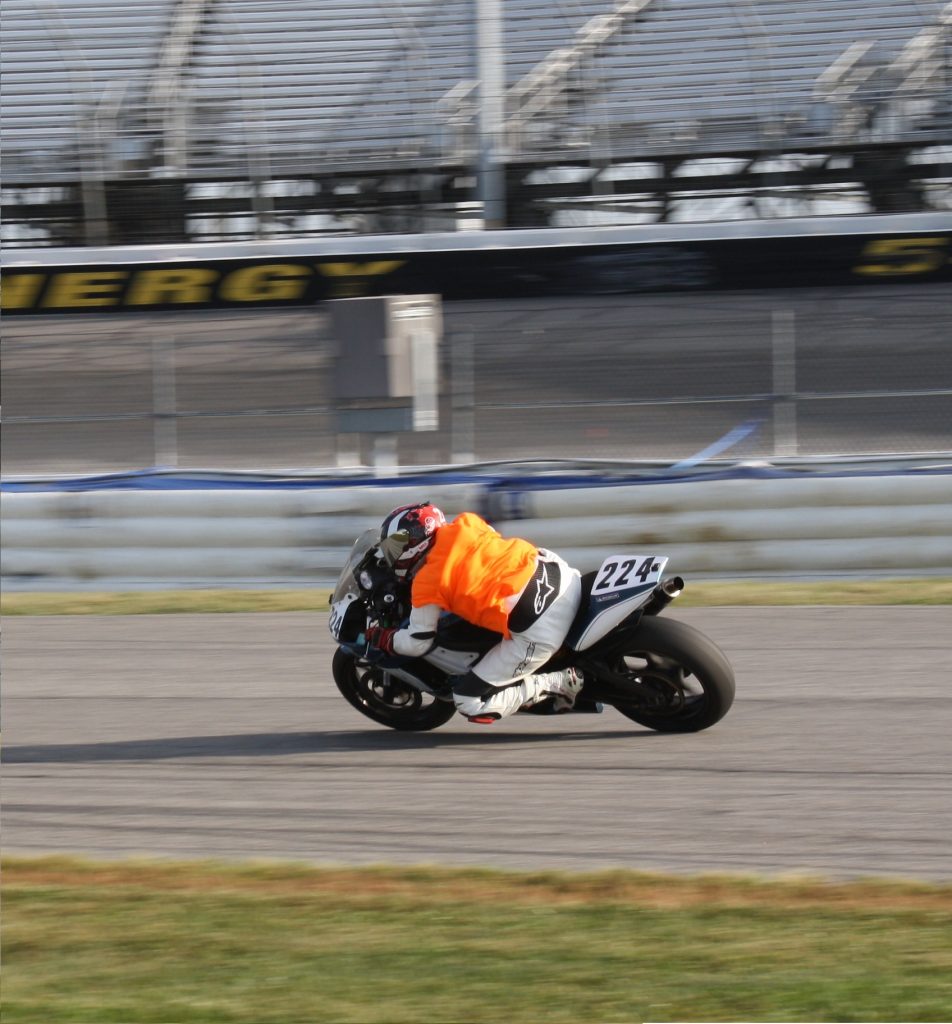 I felt like the front would fall out beneath me at any moment.    With it being so ruff, naturally I thought we needed to soften up the bike to absorb the bumps.   It made sense to me to make things plusher, so the bike would soak up those nasty bumps.   And here is where having a professional like Eric REALLY pays off.  Eric was able to listen to my feedback, and come up with a real solution, which actually was to stiffen the bike up even more! It was completely the opposite of what I thought I wanted.  Instead of telling Eric what I felt, I had made the mistake of telling him what to change.  I had no idea at the time, but I was completely wrong.  So Eric, without telling me I was dead wrong, made a change without me knowing exactly what he was doing,  just like we had done every other time earlier in the season.  He wanted me ride it in the last session, and tell me how it felt.  I was game, so off I went for the final tuning session.

One word……MAGIC.   I felt awesome, and the bike was perfect.  It did everything I asked and more.  It soaked up all those nasty bumps and felt like it was glued to the track.  And my lap times showed this new found confidence.   I had made massive improvements in the “goat trail” section.  That small change also allowed me to improve in other parts of the track as well.  My times were only tenths off the class leader.  I was absolutely elated with evolution our bike set up.  I felt ready to race. That feeling of preparedness was dead on.  In my first race I was able to make a clean pass for the lead, lead a lap or two, and eventually finish in a respectable third place. 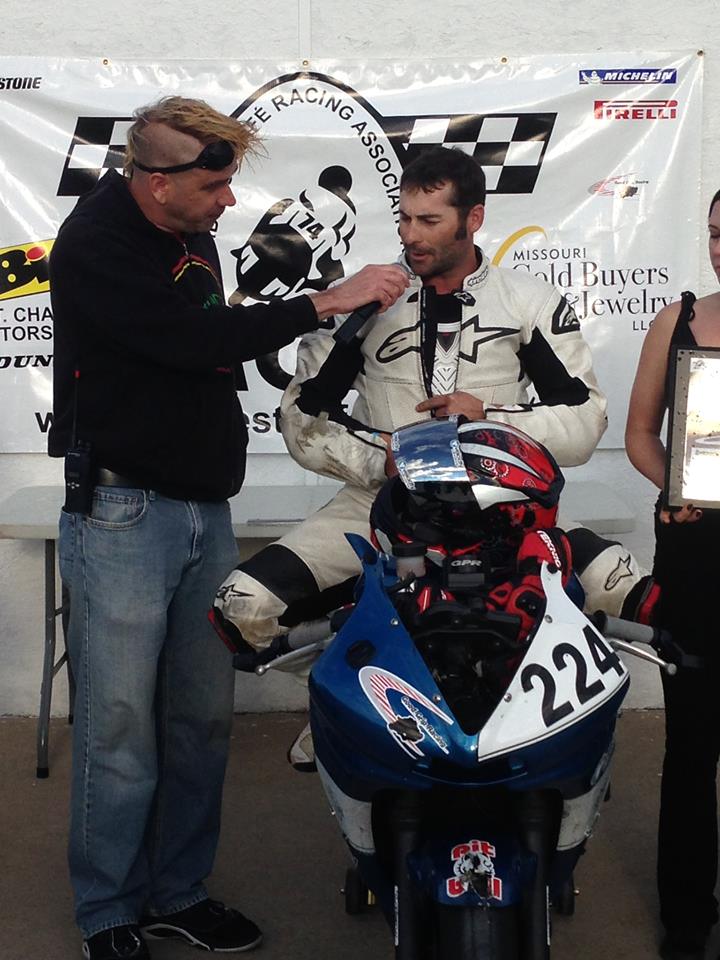 After the podium interviews, pictures, and congratulations were over, Eric sat me down and told me what he had changed.  It needed to sink in for a few minutes, but then a light bulb, no; more like a solar flare went off in my head. This was a massive epiphany.  If I had gone to the races without Eric, the weekend would have no doubt had a disastrous ending.  Not only was there a gigantic improvement in the bike, but he did so after interpreting my incorrect suggestions.  Left on my own, I wouldn’t have known where to even start.  And even when I “thought” I knew what to do, I was completely wrong.  From the moment I would have pulled the screwdriver out of the toolbox to adjust the clickers, I would have been headed in the wrong direction.  It also cemented the notion in my mind, that if I was racing, I would be a leg up on the completion to continue to work with professionals like Eric.   This would hold true, as the next weekend of racing was much more exciting as Eric and I close in on the possibility of our first win together.

Tuner Diaries: Suzuki SV650 Tire Wear Tires are the biggest expense when it comes to track days and racing.  And depending on suspension set up, this can mean tires will last half a season...
Tuner Diaries: Adjusters Last season I had a rider come to complaining about front end feel.  Narrowing it down to rebound we started turning knobs to fix the issue.  But a cu...
Tuner Diaries: Yamaha R6 I met Blake at a Midwest Track Day event in the spring of '13.  He was riding a '03 Yamaha R6 with a Fox shock on the rear and stock forks on the fron...