I met Blake at a Midwest Track Day event in the spring of ’13.  He was riding a ’03 Yamaha R6 with a Fox shock on the rear and stock forks on the front.  Both front and rear had been sprung for his weight and overall he was happy with the performance of the chassis and suspension.

He brought it to me to get a baseline and see if we could make it better.  After working all day we were able to get it set up pretty well despite one shortcoming.  The rear spring was a little soft for his weight and riding ability.  I was able to get him 25mm of sag, but because it was wound so tight he had zero free sag.  Fast forward to Sept. and I get a call from Blake.  He had signed up for a MCRA event and wanted to fix the spring issue.

We discussed our options and how to tackle the event.  He had never been to Gateway before and we weren’t sure if swapping the spring in the beginning was the best.  We came to the conclusion there wasn’t enough time, so we swapped the spring Friday night before the event.  With the new spring on we reset his sag and I sent him on his way to test the new spring. 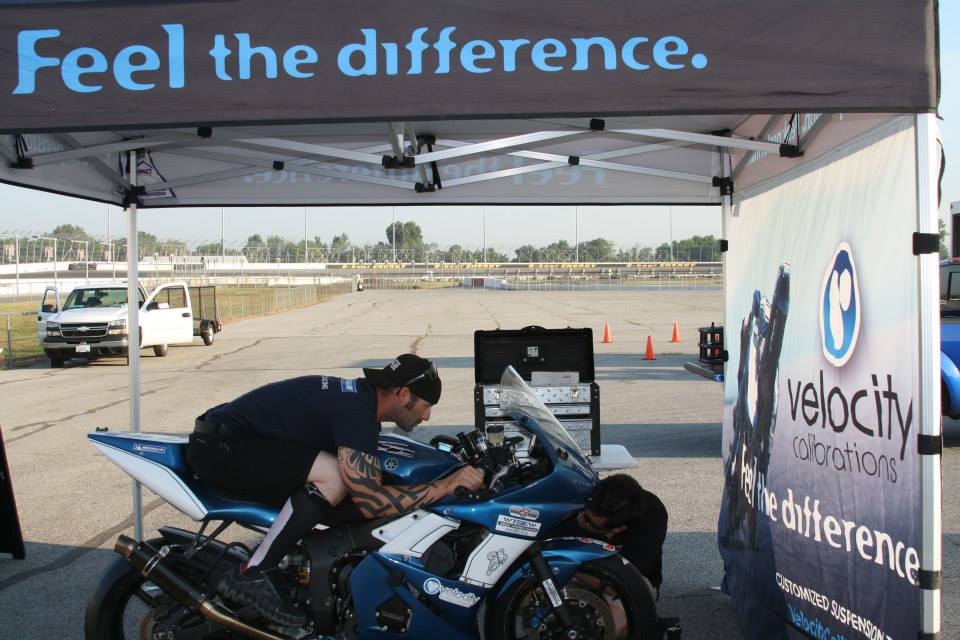 Once up to pace, Blake liked the feel of the new spring.  One MAJOR issue he was having was when exiting a turn he would get massive wheel spin; the new spring eliminated this issue. This was fixed because the excessive preload wasn’t needed to get the right sag, which allowed the spring to compress like it wanted to.  But, with the rear fixed, he had a new issue.  Now the front felt vague due to the lack of tension the old spring had pushing excessive weight on the front.

We talked for a few minutes and after checking his tire wear to make sure the tire wasn’t losing traction, I added 2 clicks of compression.  The next session Blake said the bike felt planted and feedback was perfect. It felt so good he immediately dropped his lap time by a second and a half!  He was now ready for the race.

Blake finished his first race in 3rd! Overall we made huge leaps that day to get his bike set up for his abilities and his needs.  Should be interesting to see how he likes the setup at Blackhawk Farms in October.

Tuner Diaries: Adjusters Last season I had a rider come to complaining about front end feel.  Narrowing it down to rebound we started turning knobs to fix the issue.  But a cu...
Tuner Diaries: Suzuki SV650 Tire Wear Tires are the biggest expense when it comes to track days and racing.  And depending on suspension set up, this can mean tires will last half a season...
Tuner Diaries: From the Rider’s Perspective All the decisions had been made.  The race license school booked, tires purchased, trailer loaded and set to go.  I was finally going to officially be...